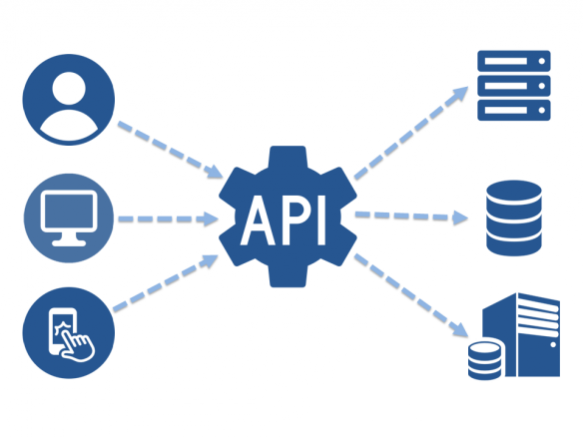 Every system uses resources. These resources can be pictures, video files, Web pages, business information, or anything that can be represented in a computer-based system. The purpose of a service is to provide a window to its clients so that they can access these resources.

Below diagrams depicts how Rest API sits in between a resource (Database) and clients (iPhone, desktop and android devices and access resources as per client’s requests via requests and responses. inform the technical staff about the problem,

REST stands for Representational State Transfer. It is primarily used to build Web services that are lightweight, maintainable, and scalable. A service based on REST is called a RESTful service. REST is not dependent on any protocol, but almost every RESTful service uses HTTP as its underlying protocol.

REST can be explained as a way to access resources which lie in a particular environment. For example, you can have a server that hosts important documents, pictures and/or videos.

In the REST architectural style, data and functionality are considered resources and are accessed using Uniform Resource Identifiers (URIs), typically links on the Web. We will study all these terminologies in detail in later sections.

Web services have really come a long way since its inception. In 2002, the Web consortium had released the definition of WSDL and SOAP web services. This formed the standard of how web services are implemented.

In 2004, the web consortium also released the definition of an additional standard called RESTful. Over the past couple of years, this standard has become quite popular and is being used by many of the popular websites around the world which include Facebook and Twitter.

Properties and Features of RESTful services

In general, RESTful services should have following properties and features:

The focus of a RESTful service is on resources and how to provide access to these resources.

A resource can consist of other resources. While designing a system, the first thing to do is identify the resources and determine how they are related to each other. Once we have identified our resources, the next thing we need is to find a way to represent these resources in our system.

Below are the ways to represent a resource:

JSON representation of a resource

XML representation of a resource

The client and service talk to each other via messages. Clients send a request to the server, and the server replies with a response. Apart from the actual data, these messages also contain some metadata about the message.

An HTTP request has the format as shown below:

Following terminologies are used in the request:

<URI> is the URI of the resource on which the operation is going to be performed.

<HTTP Version> is the version of HTTP, generally “HTTP v1.1”.

<Request Header> contains the metadata as a collection of key-value pairs of headers and their values. These settings contain information about the message and its sender like client type, the formats client supports, format type of the message body, cache settings for the response, and a lot more information.

<Request Body> is the actual message content. In a RESTful service, that’s where the representations of resources sit in a message.

URI stands for Uniform Resource Identifier. One can classify URIs as locators (URLs), or as names (URNs), or as both.

Below figure shows the format of an HTTP response:

Following are the terminologies used in the response:

<Response code> The server returns response code, which contains the status of the request. This response code is generally the 3-digit HTTP status code. The first number indicates which of them a code belongs to:

<Response Header> contains the metadata and settings about the response message.

<Response Body> contains the representation if the request was successful.

Actual response to a GET request

The response code 200 OK means that everything went well and the response message body contains a valid representation of the resource requested.

A resource can be traced using a URL. A URL has following format:

The preceding URI is constructed with the help of a query parameter:

GET is probably the most popular method on the Web. It is used to fetch a resource.

PUT is idempotent. No matter how many times you send a PUT request, the results will be same. It is also mandatory to specify the complete URI of the resource in a PUT method. This implies that the client should be able to construct the URI of a resource even if it does not yet exist on the server.

POST is not an idempotent method. Making a POST multiple times may result in multiple resources getting created on the server.

OPTIONS is used to get a list of allowed operations on the resource. For example consider the request:

The service after authorizing and authenticating the request can return something like:

The second line contains the list of operations that are allowed for this client.

HEAD returns only the response headers with an empty body. This method can be used in a scenario when you do not need the entire representation of the resource. For example, HEAD can be used to quickly check whether a resource exists on the server or not.

A RESTful service is stateless and does not maintain the application state for any client. A request cannot be dependent on a past request and a service treats each request independently.

Each of these requests can be treated separately.

A stateful design, on the other hand, looks like so:

To process the second request, the server needs to remember the last PersonID that the client fetched.

Caching is the concept of storing the generated results and using the stored results instead of generating them repeatedly if the same request arrives in the near future. This can be done on the client, the server, or on any other component between them, such as a proxy server. Caching is a great way of enhancing the service performance, but if not managed properly, it can result in client being served stale results.

For example, a service providing stock market updates would keep the cache age limit to as low as possible or even turn off caching completely as this is a critical information and users should get the latest results all the time. On the other hand, a public picture repository whose contents do not change so frequently would use a longer caching age and slack caching rules.

Caching can be controlled using these HTTP headers:

There are three major methods of adding security to an API —

JSON stands for JavaScript Object Notation. JSON is a human and machine readable format to represent data as Structured Data. It is one of the most used Data-Exchange formats.

JSON is a light weight format represented as pure text.

Below is a JSON example of two countries namely India and Nepal describing their temperatures and currencies.